When I first met Arnold, he was flying a solar plane around the parking lot of downtown Ganges, on Salt Spring Island.  It was on a ballasted six foot wire whirling on a central pivot, the propulsive power being the plane’s solar-electric driven propeller. 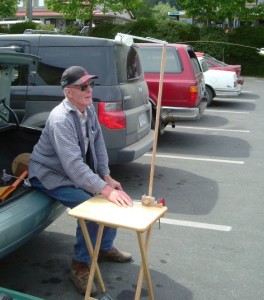 I’d sold Arnold a few panels through the mail, over the previous year, and we had agreed to meet one afternoon while his wife went hiking with a hiking group. We liked each other instantly, both practical people (though Arnold by far more). He had long retired as a farmer, where he had built much of his own farm machinery, including a 4-wheel-drive 6 tonne tractor;  and from his work with Versatile where he had helped with the design process for farm machinery as a test engineer. He now keeps himself busy making toys from recycled items, working on various model boat designs, and lately, testing a real model solar airplane. His first gift to me was a boat built with aluminum cans…I have it still. 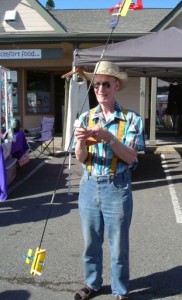 Here’s a picture of him at the Salt Spring Saturday market, perhaps a year later, exhibiting a twin plane design, these ones still on strut supports.

He  came to that particular Salt Spring Saturday market with a whole bunch of solar-driven gadgets, which I expect to show in more detail.

Over the years we

worked on several iterations of the solar flying machine stand (SolFly), but in the end, from a practical viewpoint, it was difficult justifying the cost of going that way – the machinery to build and the weather-proofing required. But it was a neat idea – as was another neat idea, the Chariot of the Sun – which we DID bring to market.

And it is those neat ideas, and perhaps some of the process of invention, the different iterations of a design, the byways of suggested moves, the accumulation of knowledge of what works, and what doesn’t, through visualizing ahead, and experimentation, that I hope to bring to you in pages ahead. Welcome to the world of solar toy invention, by a man who knows mechanics, and uses simple materials.