Have just picked up John Perlin’s latest book, Let It Shine: The 6,000-year old story of Solar Energy. This is a 30-years-later updated version of his book, A Golden Thread: 2500 Years of Solar Architecture and Technology – which was THE bible of the history of solar energy usage. Obviously, he learned a bit more in those years, adding 12 new chapters, as well as 3500 more years! 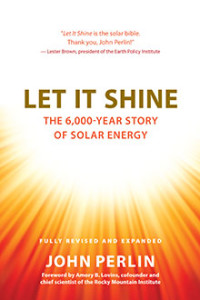 In my opinion, not enough good can be said about John Perlin – he has stayed focussed on the role of solar energy in our world’s civilizations, and writes in a simple and engaging way.  I very much liked his book A Forest Journey: The Story of Wood and Civilization, which “…examines in great detail the fuel shortages principally caused by forest devastation, that led many civilizations to turn to the sun to heat water and home interiors.”

Another book John wrote is From Space to Earth: The Story of Solar Electricity.  From the commercial invention of the solar cell by Bell Labs in the early 1950’s, progress was slow and precarious for a while. The Space missions showed its eminent usefulness, and gradually solar power developed on the planet below.

To quote from his introduction:  “Let It Shine presents the core of A Golden Thread, along with twelve new chapters and many additions to the older ones, making it the definitive history of the uses of solar energy throughout time. By giving an in-depth account of past successes and failures in applying the sun’s energy to the art of living, the book offers insights into what the future of solar energy may come to be.

“The first and most difficult step in crossing over from today’s fossil-fueled world to a solar future is realizing that it can be done.”

Again, if you want the best books you will ever find on Solar Energy and its Uses, read John Perlin, in particular his latest book, Let It Shine!

Update:  In fact, John gives a quick view of some of the major aspects in this article:  Seven of the Greatest Solar Stories Over the Millennia.