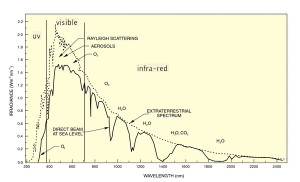 The concept of solar energy can be abstract. We might know that it is electromagnetic radiation from the Sun, but  “WHERE on the electromagnetic spectrum is it?… and “HOW MUCH is there?”

Knowing where and how much gives a person the power of their solar energy inheritance.

Solar Energy is what we’ve always known as light and heat.

We receive solar energy at an intensity of 1 kilowatt per square meter at sea level for many hours of the day.

The amount of sunlight we receive, and at which wavelengths is called Earth’s insolation curve. “Insolation” – see the word Sol? – is the amount of energy received in sunlight.

In looking for a graphic of Earth’s insolation curve I noticed a new one up on the net, courtesy of  Newport.com (where they have a good information page on solar irradiance).  I’ve added a couple of lines to show the visible spectrum (click on above).

It is the AREA under the curve that represents the amount of energy at those wavelengths.

I also see that the standard used by many these days is this curve. Note that Solar Energy peaks in what we know as our colour blue. Again, over 40% of Solar Energy is visible light.

And in looking that graph up, came upon the Solar Book On-Line Study Reference, originally of Ireland.

I can’t say I’ve seen as many subjects around solar energy covered quite as simply and concisely – this is an excellent reference. In their “History of Solar Energy”, of the glass box experiments by de Saussure, we find: “Clear glass has a peculiar property: it easily allows sunshine to pass through, but inhibits thermal radiation from doing the same”.

De Saussure was wondering why it was colder higher up on mountains than lower down. So he climbed and descended, taking measurements both high and low, and discovered: “…the sun shines with almost equal force at higher and lower elevations—as proved by the equal temperatures in the hot box on the mountain and on the plains.

His conclusion: “At lower elevations there are greater amounts of carbon dioxide and water vapor in the air. This denser atmosphere holds in the solar heat more effectively, retarding its escape into space; so it gets hotter lower down.”

These early investigations were the background to our current understanding of what is called “The Greenhouse Effect”…the fact that most dipolar gases in our atmosphere absorb infra-red radiation remarkably well, considering their scarcity.

But of re-radiation another time – I’m glad to see so many good insolation curves out on the Internet these days.  And DO have a look at Ireland’s Solar Book, which as “…the on-line companion site for solar installers undergoing training…” is an excellent reference for all students of the Sun.