There are several types of solar cells being developed…a good description is at Understand Solar, a site dedicated to educating the homeowner about solar electricity, here:

Comparing Solar Panels, and the Future of Solar Research.

Click on the graphic below – it will enlarge – to get a clearer picture of how a solar cell works. 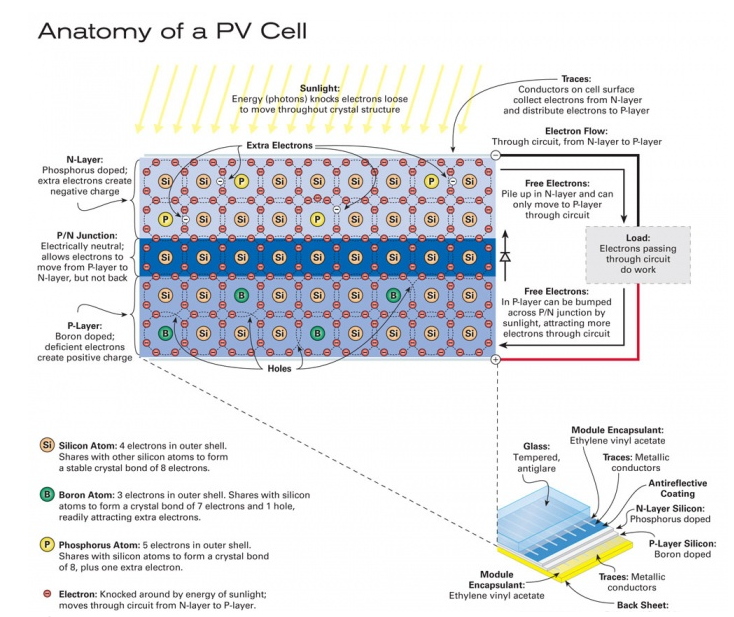 When the two layers are joined, the positive holes and electrons at the junction immediately (within milliseconds) cross over, forming an electrostatic field, so there is a thin lip of negative charge on the p-side (got positive holes), and a thin lip of positive charge on the n-side (got loose electrons). The p-side overall has too few electrons to fit the electron cloud pattern comfortably, and therefore has more positive holes; the n-side is the one with too many electrons to fit the lattice, and so has more freely roaming electrons. The electrostatic field immediately formed at the junction prevents electrons from the n-side (where electrons are in the majority) from crossing over easily; though it does accelerate loose electrons from the p-side if they happen to be near the junction (and this is the most important point).

Sunlight comes in. Its electromagnetic energy can break electrons free from their lattice bonds, creating loose electrons and positive holes on both sides of the joined crystal lattice sheets. If an electron is freed near the junction on the p-side (where free electrons are in the minority already), it will be whipped over to the n-side (where electrons are in the majority) by the electrostatic field. Same with a positive hole in the n-side near the junction…it will be whipped over to the p-side. With incoming sunlight energy, the layers build up a net electrical charge. It turns out that it is easier for the electrons in the n-side to migrate to the p-side through wires we handily lay out connecting the two layers than it is for them to get back across the electric field. 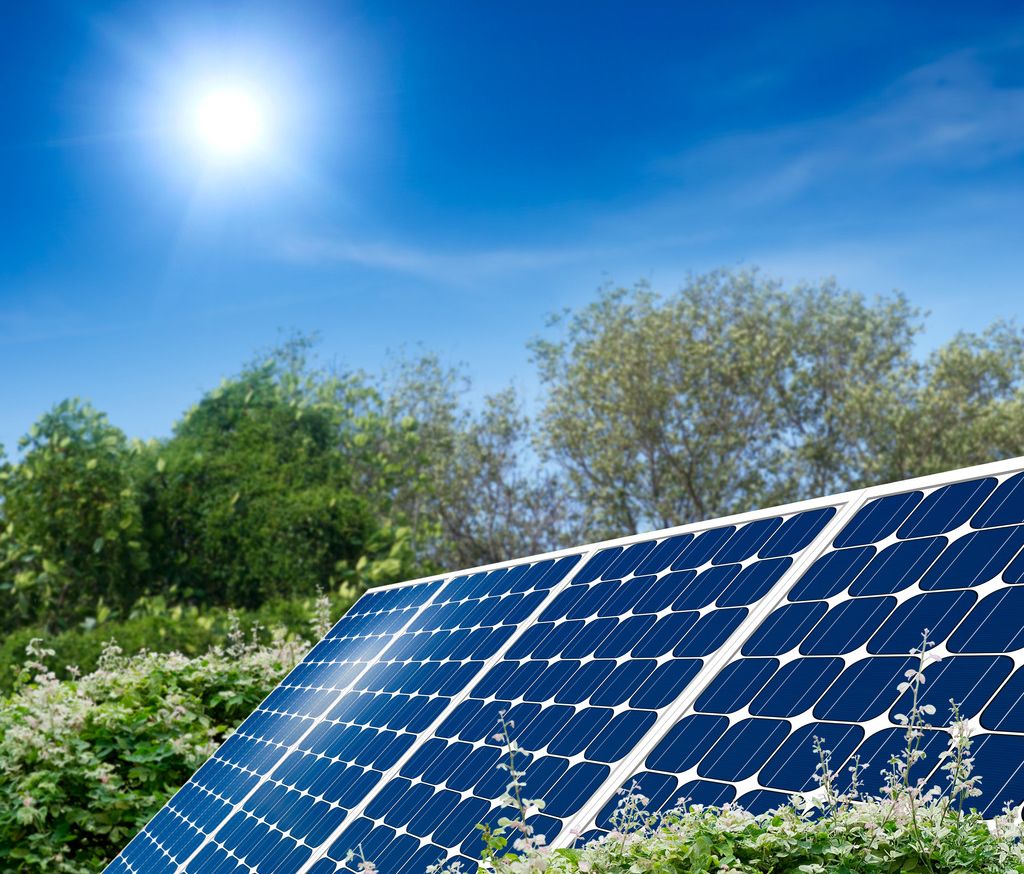 Sunlight excites electrons in photovoltaic panels, producing a flow of electrons with which we can do work. Courtesy of HomePower magazine.

The electric potential difference created at the junction, and by the difference in energy levels of free and bound electrons, is around 0.5volts. The n-side is thinner than the p-side.

A solar panel doesn’t store energy like a battery…it directly converts the Sun’s radiated electromagnetic energy to a flow of electrons (electricity). Without sunlight, the photo-electric effect stops.

The process in normal commercial solar cells is about 15% – 20% efficient. Though receiving 850 – 1000 watts of power from the sun, a square metre of solar panels might produce up to 130 watts of electricity, depending on its efficiency. However, sunlight may be used to directly heat air and water, often at 70% and up to 90% efficiencies. Think about that.

Some factors influencing a solar cell’s output are: angle of sunlight through atmosphere, angle of panel to sun, season of year, atmospheric haziness, cleanliness of panel’s surface, temperature (less efficient when hot), and amount of light focussed or reflected onto it.

[Sometimes another person’s description helps.] Try also Marshall Brain’s How Stuff Works for a clear description of how a solar cell works.

More advanced? See Norwegian University of Science and Technology (NTNU). “The site was made (2008) for and by students with technical understanding for physics and solar cells. It gives a basic and an advanced understanding of how solar cells works, their limitations and how to improve the efficiency.

Another good explanation, at a student’s level, is at the Solar Cell Central site of Four Peaks Technologies, Inc., in Scottsdale Arizona. 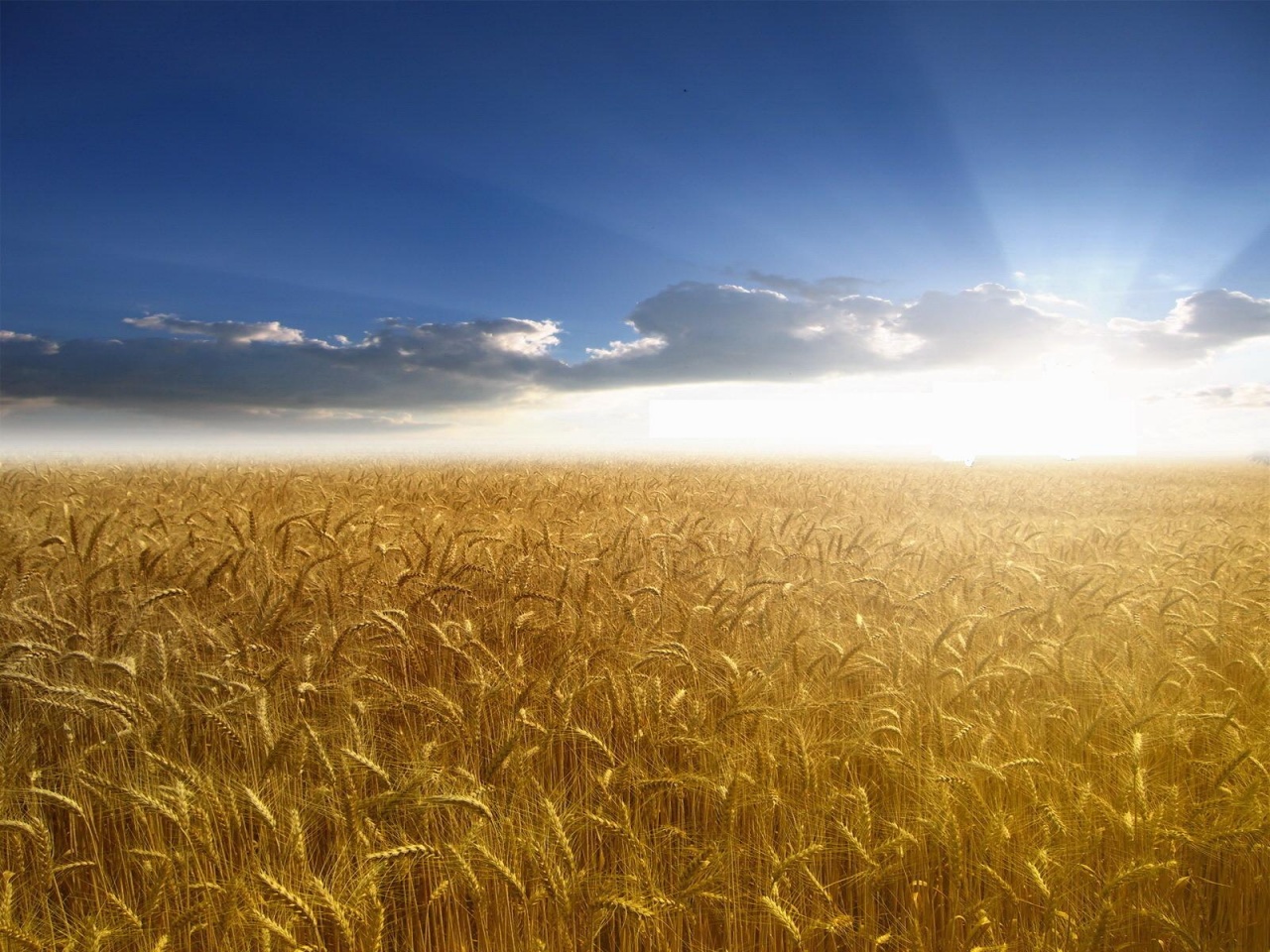 Another useful graphic is here, from SaveOnEnergy.com:

Confused about Power and Energy?

See this discussion of KiloWatts and KiloWatt-hours. In the comments section an alternate definition: “KW is an absolute power at any point of time which may remain constant, or it may vary over a time. This power multiplied by time for which it has remained on is an amount of energy i.e. kWh. So kW is a power and kWh is an energy. One kWh is one unit of energy. Power x time = Energy.” – Jaydeep Shah

When designing a solar-electrical system for a home, some photovoltaics information from may help. From there you may want to try out their . You might like to visit Good descriptions and photo illustrations of the various components of a home power system.

When designing a solar-electrical system for a home, some photovoltaics information from Energy Alternatives may help. From there you may want to try out their design process. You might like to visit Dan Metcalf’s solar-powered Web site. Good descriptions and photo illustrations of the various components of a home power system.

There are many companies selling solar products. If you want a good education in current solar technology and applications, give them a call and get their catalog. They generally have simple lessons explaining the technology and correct use of their products. On-line catalogs are becoming more common. Real Goods, for example…[shop ’til you drop].