You would not ordinarily look directly at the Sun, because it can blind you.
Similarly, use caution when concentrating light energy.

These are not enough protection to ever look directly at the Sun, but they provide some protection in concentrated sunlight. Remember, you are experimenting with RADIANT ENERGY. In particular, it’s the unseen highly energetic ultra-violet rays that can be the most damaging. The absorbtion of these by the eye can leading to premature aging of the eye, clouding, and blindness. Further, when concentrating solar energy, you can create situations that might burn unprotected skin. 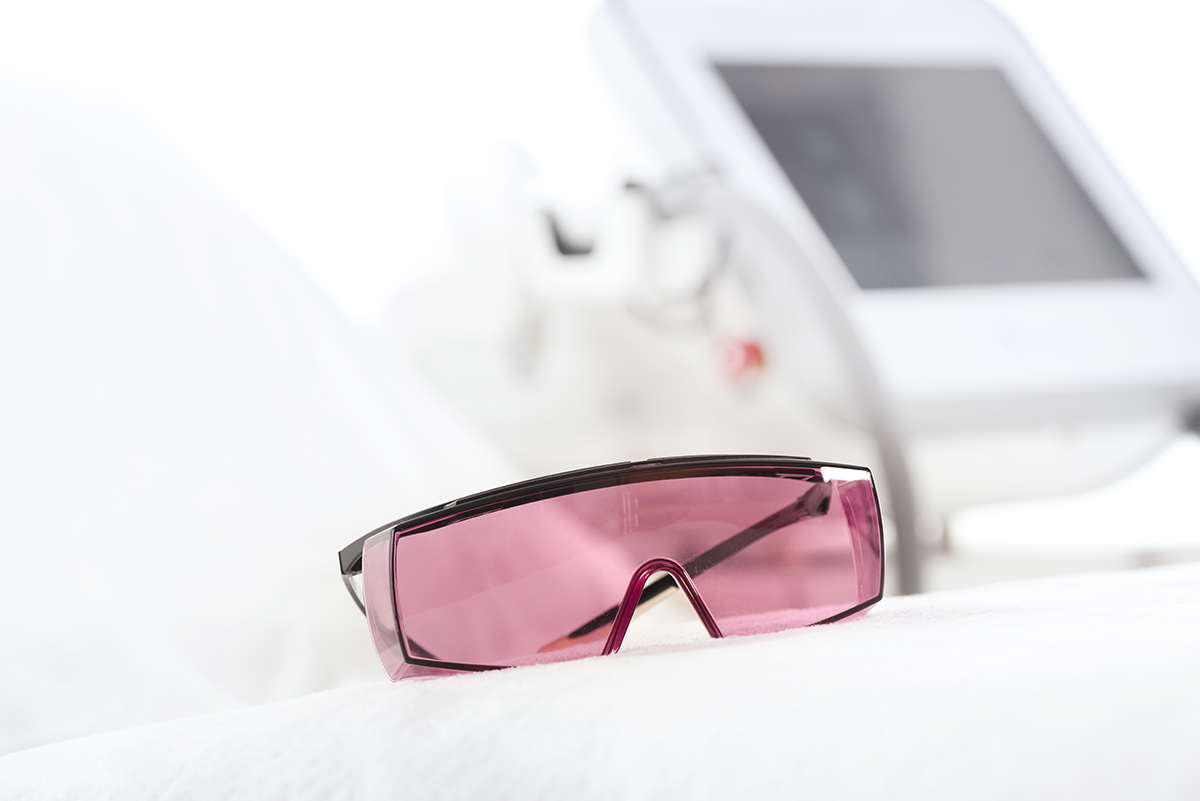 Radiant electromagnetic energy (solar energy) can also age skin. Although some Sunshine is necessary for health, over-doing it can lead to premature wrinkling of skin, and, increasingly, skin cancers.

As the Australians say, when going out-doors, “Slip, Slap, Slop”…Slip on a Shirt, Slap on a Hat, Slop on some Sunscreen Lotion.

This is more pertinent in our day and age because for several decades we used what we thought were very stable chemicals for refrigeration, air-conditioning and foam-blowing…CFC’s and HCFC’s. It turned out these gases were ascending gradually into the upper atmosphere, and there, broken apart by sunlight, are reacting with the ozone layer. Upper atmosphere ozone absorbs ultra-violet light. There’s not so much of it around any more, and the thinning is expected to continue for another 50 years. So be careful…more of the highly energetic ultra-violet radiation is getting through to us.

Solar energy is light energy, electromagnetic radiation.
What we already know about light is useful in gathering and concentrating solar energy.

REFLECTION – Light bounces. We can reflect light. We use this all the time in mirrors. But by reflecting light we are reflecting energy. It is possible to concentrate light energy by using several mirrors to reflect light to the same spot. Or by using a curved mirrored surface.
Concentrating Solar Power (CSP) technologies “…use mirrors to concentrate (focus) the sun’s light energy and convert it into heat to create steam to drive a turbine that generates electrical power.” Here, a good overview of the different types.
Parabolas: Turns out that the curve most suited to concentrating solar energy (that is, reflecting it back to a focal point) is a parabola, not a half-circle.


Arba Minch Solar Cooking Initiative: “…experiences on promoting the use of a simple parabolic solar cooker to save firewood in Ethiopia.”It has been recently re-discovered that the early Chinese used polished brass parabolic mirrors to start evening cooking fires.
See National Geogrphic’s Energy Blog, “Seven of the Greatest Solar Stories over the Millennia”convex

REFRACTION – Light bends. Another way to concentrate light energy is to bend the rays of light so that they gather together (focus) at one particular spot. We use this most often in lenses.
An interesting lense design is the fresnel lense. August Fresnel, a French mathematician and physicist of the early 19th century, duplicated the effect of a huge convex lense using glass prisms. In this age of plastic, thin circular prismatic lines can be stamped out on a plastic sheet. Fresnel lenses are now sold in office supply stores in 8″ x 11″ sheets as page magnifiers, for approximately $2.00. 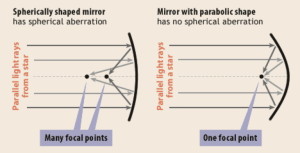 Lenses can be used not only to concentrate solar energy for heating purposes, but also to boost the amount of energy falling on solar photovoltaic cells.

“…a solar concentrator electric system uses a plastic Fresnel lens, similar to those found in overhead projectors, to concentrate sunlight many-fold before it reaches the solar cells.” 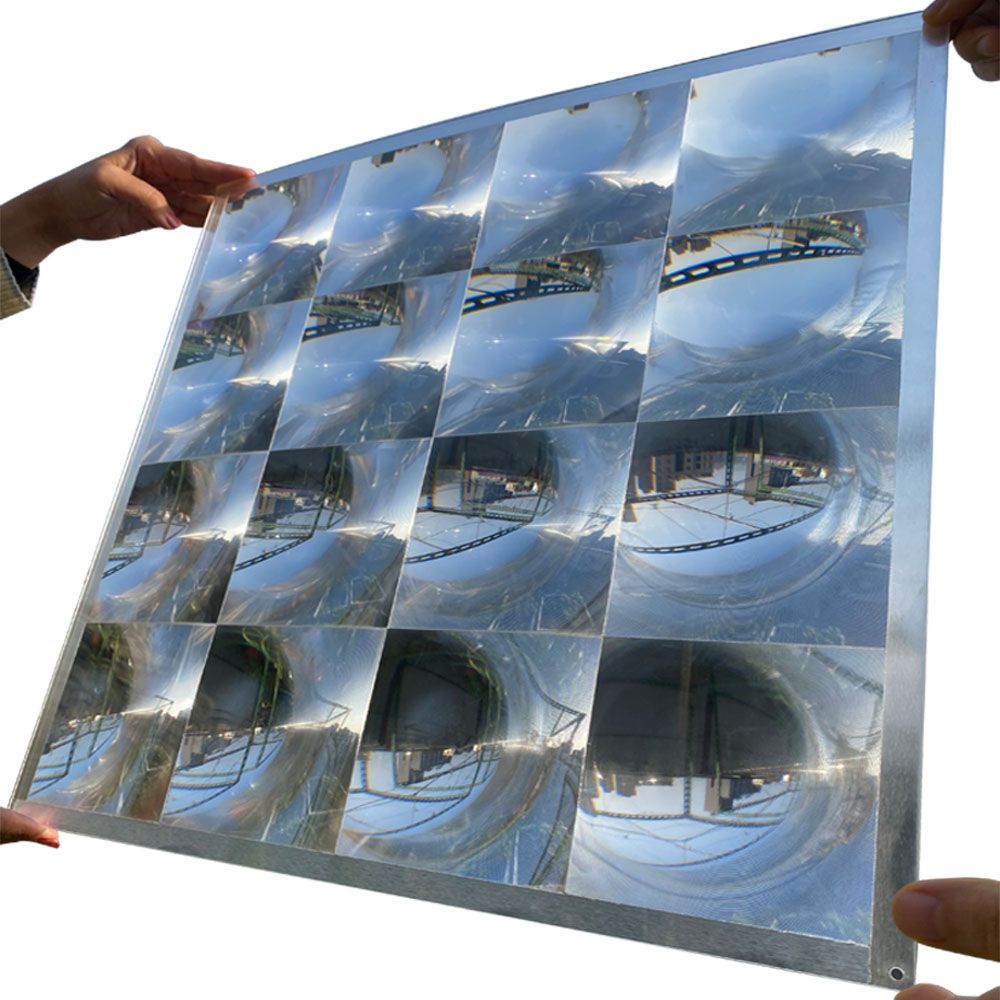 ABSORPTION…AND RE-RADIATION – Light enters in.We know from color studies that what we perceive as colors are actually frequencies of reflected light photons. When light strikes an object, some of the wavelengths of light energy are absorbed, some are reflected.

We perceive leaves as green because they are reflecting radiant energy of a wavelength that our eyes and brains “see” as the colour green. The other light energy wavelengths are being absorbed by the leaves.

At the extremes of colour reflection are the “colours” white (all colours combined) and black (no colours at all). A white object is reflecting nearly all of the light energy falling on it.

A black object is absorbing nearly all of the light energy falling on it.

Light energy absorbed is re-radiated as lower wavelength heat radiation. An object of any temperature will radiate energy as electromagnetic radiation. The hotter an object is, the shorter the wavelengths of electromagnetic radiation that it emits (and the higher the energy per photon). The Sun radiates energy from its heated outer gases at about 5800 degrees Kelvin, and so emits energy peaking in the short wavelengths of our visible light range.

When an object is heated up on the Earth’s surface, by absorbing solar energy, it is never as hot as the sun. The electromagnetic radiation it emits will be of lower energy and longer wavelengths.

[This is a great educational site, but the interactive applets take a while to download. Well worth the visit.] We, who are existing at about 300 degrees Kelvin* (heated by the plant-absorbed solar energy released by digestion), radiate energy in the far-infra-red. [*A degree Kelvin is the same size as a Celsius degree, but the Kelvin scale starts at Absolute Zero, rather than the Celcius scale which has zero as the freezing point of plain water…which is at 273 degrees Kelvin.]

Light goes through. Some materials allow light pass to through them.
We call these transparent.
Good examples are window glass, and clear plastic.

What this means is that energy can build up in a glass solar energy trap. While energy is coming in all the time, it can’t re-radiate back out directly through the glass. Most of us have experienced this effect in a car in summer-time, or in front of a house window through which the sun is shining. It’s the working principle of greenhouses, and solar box cookers. Selective films allow us to control to some extent which wavelengths enter, which are reflected. Different glasses can allow different wavelengths of radiation to enter.

Principles of Solar Cooker Design: [This is the best I’ve found for explaining solar energy principles clearly. There is simply nothing like building a solar cooker to get hands-on experience with solar energy, building techniques…and cooking!]