A Postage Stamp of Sunlight

Activity: Children build a two-dimensional model of our planet with Sun shining on it, rotating in Space, and relate their planetary position during that rotation to the 24 hours of our clock.

Directions: On a large sheet of construction paper or cardboard have the children make an appropriate Sun image in Space.

To make an ‘Earth”, here I’ve found an image on-line with the North pole at the center, and glued it onto a circular piece of cardboard. But students could as well draw their own Earth image.

Students will probably put the sun and planet in various sizes and locations. Have the children decorate their planet model at least to the extent that they mark their rough location on the planet. A paper fastener goes through the center of the cardboard ‘Earth’ and into the construction paper below.

Between the ‘Earth’ and the background construction paper I’d inserted a sheet of paper with hours marked on it. This remains fixed. But, again, to save materials, the clock hours could as well be written directly onto the construction paper. (The hours show up more clearly this way.) 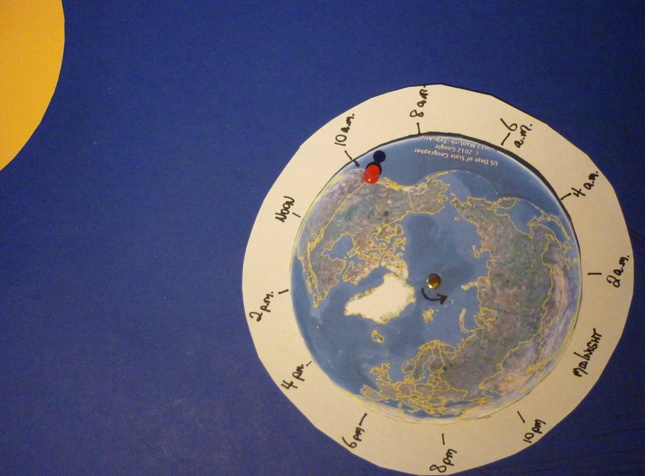 Have the children decorate their planet model at least to the extent that they mark their rough location on the planet. Students will probably put the sun and planet in various sizes and locations.

Note to the students that the paper fastener goes through the pole of this ‘Earth’, and that this is a two-dimensional (not three-dimensional) model. To be accurate, one would have to say this is a model of an equinox day, when there is equal light and darkness at every latitude.

It is definitely NOT to scale.

It does, however, clearly model how daily time is measured and experienced on our planet, and how our clock came into being.

Have them slowly rotate the Earth model within the fixed wheel of hours. Match their position to time as their ‘Earth’ spins.

Ask them to draw a picture of what the Sun would like to them, standing on the Earth’s surface, at sunset, at noon, in the morning or afternoon…and again, relate that to the model’s position depicting that time. 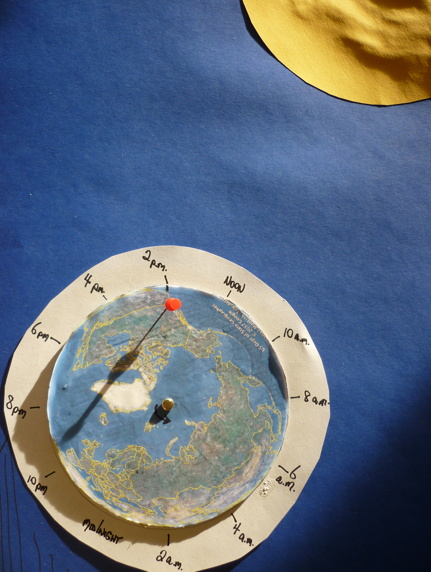 Note to the students that light travels in straight lines from the Sun, and that when their location has passed the “sunset” line, they are shadowed by Earth itself.

Even though Space appears dark at night, and we can see the light of other stars shining directly into our eyes, there is the same Sun-light energy rushing past Earth at all times. Remember, “It is always noon somewhere!”

All of Space around us is always filled with the same light energy we experience most directly on a clear day at noon. We are simply living in our own shadow at night.

Consider that Venus, still often called the ‘Evening- or “Morning-Star”, appears very bright to us, even though night appears dark, and the space around us, empty.

We know Venus is not a star. It is a planet. It is simply reflecting some of the light striking it’s surface, into our eyes.

All of Space surrounding the Sun is filled with light-energy always.